It’s a land of opportunity today: the Independent Television Authority are advertising for experienced engineers while Granada are looking for architects and draughtsmen to help with the design of television studios. 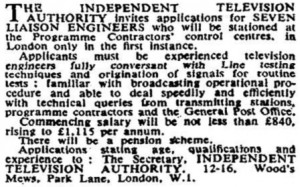 The Times was in attendance at the start of the 61st season of Promenade Concerts at the Albert Hall and there spotted some television cameras. Fortunately, “when they had played their part they were covered with blue drapes that added to the gay colour scheme of the decorations.”

There’s a report on Friday’s Annual General Meeting of Broadcast Relay Service Ltd and the speech given by its Chairman and Managing Director Mr John Spencer Wills. The vast majority of what Mr Wills had to say concerned the company’s wired television service provided at home and abroad and little was said about Associated-Rediffusion although, in declaring that, “it starts to provide the television programmes at 7.0p.m. on September 22” this may have been the first time the exact start time has been specified.

The Guardian‘s Radio Critic found much to praise in the BBC production of T. S. Eliot’s play The Confidential Clerk, describing it as a “first-rate production” which “achieved the balance and deliberation that are essential.” Having minor criticism for Joan Greenwood’s performance – “slightly out of step”, RC found Harcourt Williams “splendid”, Kenneth Haigh and Alexander Knox “good” and Olga Lindo “admirable”. John Stratton was also praised in his role of “the one ordinary person” B. Kaghan.

“From my own armchair, this television production received the bouquet. It was a play of complete satisfaction. Of fun, of flashes of humanity, of pathos, and of lines with plenty of punch. And it had a fine cast. A glowing performance from Miss Joan Greenwood, giddy madness from Isobel Jeans, controlled vitality from Alexander Knox and, it goes without saying, perfection from Olga Lindo.

Cyril’s colleague, Robert Cannell, mentions Bruce Seton’s first panel show appearance in Find the Link in which the Fabian of the Yard actor “scored the only two successes credited to the new team.”