Missed By A Whisker

The BBC are recruiting in the north – big time (click for enlarged version): 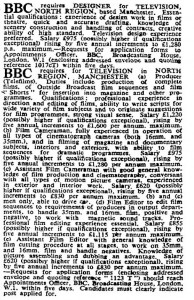 The Times reports on a broadsheet entitled “Balance Sheet of the Press” which has been published by Political and Economic Planning (PEP) examines advertising and, in particular, the effect which commercial television might have on newspapers.

PEP estimates that the expenditure on television advertising could be around £20m in 1956, £30m in 1957 and £35m in 1958, after which it expects a levelling off once the opening of the major ITV stations is completed.

The authors of the survey conclude that the weaker sections of each advertising medium – the worst poster sites, the most expensive-per-reader magazines and so on are most likely to be affected.

Elsewhere, both “The Thunderer” and the Daily Mirror report that the current holder of the world three-mile record, one Mr Christopher Chataway – will be leaving his position as a transport executive of a brewery company to take up an appointment with Independent Television News which will involve the preparation and reading of news bulletins. The Mirror is clear to make plain that “he will not be concerned with sporting programmes, nor will he endorse products, as this might obviously endanger his amateur status.”

The Times‘ television reviewer enjoyed Michael Pertwee’s play last night, finding that it admirably sustained suspense for its duration. Although the play employed “a stock collection of characters” the reviewer still found praise for the cast: “Mr Hugh Burden managed to find some fresh attitudes for an obsession-ridden victim of war; Miss Jill Bennett… skillfully too the main stresses of the piece in a resourceful performance, and Miss Beatrix Ranger was briefly telling”.

Robert Cannell, writing in the Daily Express, almost agrees with his anonymous Times counterpart but found the whodunnit “went on just two minutes too long last night. And the plot was blown sky high.” I need to quote this in full, so:

The story tells of a pilot – Hugh Burden – rescued after two years in an Eastern jungle following a crash. His nerve has gone, madness draws nearer every day. To save him from the asylum his wife prepares an overdose of sleeping drugs. The husband dies… All strong, meaty stuff, marred only by a tendency to
shout in the more dramatic passages.”

The attractive wife, played by Jill Bennett put to trial but is acquitted of murdering her husband but then

the whole plot is destroyed by the last-minute revelation that the family doctor has sat through the wife’s trial with the husband’s suicide confession snugly tucked away,” in case things went wrong.

This just could not happen – not even in TV drama.