As reported in The Times, at yesterday’s Annual General Meeting, the 59th such gathering for The British Electric Traction Company Ltd, its chairman, Mr H. C. Drayton, said that, via their subsidiary company the Broadcast Relay Group, “it is right an proper for me to bring to your notice that the group has entered the field of commercial television. As with all other ventures, there are bound to be teething troubles, but from the little I know about the new activity I think that in a year or two it should prove to be an investment which neither they nor we will have any cause to regret”. Let’s hope that’s true.

The Daily Express‘ Political Correspondent writes that the Chancellor of the Exchequer, Mr Butler, is planning to introduce stricter Hire Purchase terms to halt the spending boom. Normally, spending is thought of as a good thing, but here there are two problems. The more immediately obvious one is that the spending he’s trying to curb relates to items being bought on credit and the amount of debt people are getting themselves into as a consequence. The second issue is that domestic consumption is leaving the country with too few goods to export and this is adversely affecting the balance of payments.

Between 1952 and July 1954, for a number of items including radios and television sets (hence the interest here), a minimum deposit of one third of the price of the item was required and a limit of 18 months was imposed on the repayment period. This was changed in July 1954 when both restrictions were lifted and then around five months ago new restrictions, albeit less onerous ones, of 15% and 28 months were applied. These seem to have been “virtually no impediment to the buying boom” and hence the likelihood of further changes. The correspondent suggests that a reversion to the 1952 policy is a possibility. William Greig in the Daily Mirror suggests that minimum down-payments may soon be doubled: not quite as severe as the Express man suggests, but not far off.

One business which may be particularly interested in the Chancellor’s decision is The Radio and Television Centre aka G. E. Samways and son of London Road, Hazel Grove near Stockport. They’re advertising in Manchester’s Guardian newspaper. 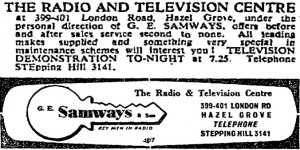 Tonight, of course, sees the broadcast of Peter Brook’s play in the series Appointment with Drama. This newsworthy production is, perhaps, a little disappointing lasting, as it does, a mere 15 minutes. Of course, less can be more – we’ll have to wait and see.