The Guardian’s front page carries the news that Sir George Barnes, “Director of Television at the BBC since 1950, is resigning next year to become Principal of the North Staffordshire University College, Keele”. The appointment takes effect on 1 September 1956. He will be the college’s third Principal since its formation in 1949. The paper’s London Correspondence column speculates on the identity of Sir George’s replacement at the BBC and suggests Cecil McGivern, the Controller of Programmes, as the most likely choice. The Times also carries this news.

In the more immediate term, there are other vacancies at the BBC: 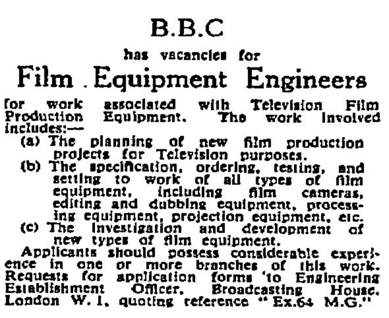 Meanwhile, in the House of Commons, the practical difficulties of the fourteen-day rule were apparent. Sir Robert Boothy asked the Prime Minister if he would assure the house “that the Government would not give the BBC or the Independent Television Authority information which he was not prepared to give to the House.” This was a reference to the fact that Members of Parliament only learn what business is to be conducted on any given week on the Thursday before but television companies wishing to obey the fourteen-day rule need to have that information much earlier. The Prime Minister gave what The Guardian’s Parliamentary Correspondent described as “a lame reply” by saying “that it was open to any member to find out through ‘the usual channels'”.

The Times reports this too and mentions Mr Maurice Edelman who had asked earlier “whether, in view of the 14-day rule on broadcast discussion, [the Prime Minister] would arrange for the business of the House to be announced 14 days in advance.” Mr Eden had replied, “I do not think that any change in the present long standing practice is desirable.”

Mr J. D. G. Hooper, Secretary of the Caterers’ Association of Great Britain writes to the Editor of The Times declaring that the new Copyright Bill’s facilitation of an agency to collection monies from hotels, restaurants and other places where television was publicly displayed. He suggests that this is “unfair and unjustified”, that television “is not necessarily a source of additional revenue; the reverse may in fact be the case because guests are likely to watch television when they might otherwise be engaged in activities profitable to the establishment.”

Why, if a television set displayed in a public area was found to reduce the amount of money coming in, would any business retain it? Mr Hooper does not say.

The tabloids are rather too interested in Princess Margaret to worry much about television this week.