TV Advertising is Picking Up…

Today, The Times carries a report of the tenth Annual General Meeting held by William MacDonald & Sons (Biscuits) Ltd in Glasgow on 13 July. News is good and profits before tax are up to £336,470 from £301,359. So what’s this got to do with…? The chairman and managing director, William MacDonald, mentioned in his speech that, “Commercial television is scheduled to start in London towards the end of September 1955, and we propose to make use of this new advertising medium for a main line, Chocolate Penguins.”

On the same day, but reported today, the House of Commons Disqualification Bill was published, with the intention of clarifying who is disqualified from being elected. Among those squeezed out are various members of the judiciary, holders of certain posts in the Civil Service, members of the Armed Forces of members of a Police Force and a … “member of a national broadcasting council.”

The Guardian’s Radio Critic (hereafter, RC) has much to report on last night’s Panorama which went unmentioned here yesterday simply because next to no information about each edition is carried in Radio Times. RC felt that last night’s edition was “sleepy” and although the programme is usually “provocative” yesterday’s “went along at a leisurely pace”.

So what was in the programme? Well, RC thinks that the most controversial item featured Dr Letitia Fairfield and Jeanne Heal who argued for and against capital punishment. Aside from this, Charles Hadfield spoke on canals and John Betjeman protested against the Transport Commission’s plans. Mr D. F. Karaka, author of “The Fabulous Mogul” told amusing stories about the Nizam of Hyderabad, and there was a feature on the Soho Fair.

RC also feels that with a programme like Panorama made up of a miscellany of items and with multiple speakers – “and more than one with foreign names” – the BBC “really ought to make it a routine matter to print the names on the screen either at the time or afterwards.” 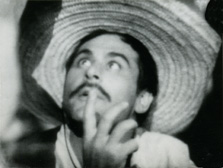 Another programme with plenty of “foreign names” is the repeat of the play The Legend of Pepito. This had been adapted by Ted Allan from one of a number of short stories set in Mexico written by the mysterious German author B. Traven. Originally shown in early June, Alvin Rakoff had directed Sam Wanamaker as Pepe, Jacqueline Hill as Jeannie and Roger Delgado as Father Francisco. Peppered with recognisable character actors, the production also featured Wolfe Morris, Harold Kasket, Alexander Gauge, Harry Towb, Margot van der Burgh and Ralph Nossek.