You Too Can Write for Television

The Guardian’s “Books Received” records the receipt of Writing for Television by Arthur Swinson (A & C Black, price 16s). Is this the first such publication in the UK?Let’s hope they review it in due course.

While no doubt most of it was written rather than just made-up off the cuff, few people are credited with the writing of the television on the air today, but one of them is Naomi Capon who has both written and produced The Ragged Thieves. This children’s television play is “based on incidents in the life of the Seventh Earl of Shaftesbury” who lived between 1801 and 1885, and after whom Shaftesbury Avenue was named. Michael Aldridge, who is currently “appearing in ‘Salad Days’ at the Vaudeville Theatre” plays Lord Shaftesbury.

Later, as part of a generally rather educational evening’s broadcasting, a telerecorded film takes the viewer on a tour of The Red Castle in Powis where treasures that once belonged to Clive of India are kept. Our guides are Philip Phillips and Clough Williams-Ellis.

Colin Morris’ documentary, The Unloved, about “children who have been deprived of the love of parents” and which was first shown in early June is repeated from 9.15pm and 10.15pm and this is sandwiched between Atoms For Peace, a report from the International Conference on the Peaceful Uses of Atomic Energy in Geneva, and further reports from the British Association for the Advancement of Science’s Annual Meeting in Bristol.

In a bid to clarify the state of play vis a vis broadcasting hours, the Post Office has released a statement, the text of which was reproduced in The Guardian. The statement makes it clear that “from Monday to Friday there should be a maximum of 35 hours broadcasting” and that “on Saturday and Sunday there should be a maximum of fifteen hours.” With the exception of Sunday, where the limit is seven and three-quarter hours, there may be no more than eight hours of broadcasting on any single day.

The Daily Express’s Opinion column reckons that “Commercial television needs no coddling. All to the good if it does have an improved service to compete with. This bar on the BBC is utterly unjustified. Dr Hill should reverse his own orders right away.” Doctor’s orders, geddit?

Under the subheading “Further Reply to I.T.A.” The Guardian’s Radio Critic believes that “The prospect of competition has already caused some queer programmes to creep into the television service” but feels that “so far as news is concerned the rivalry can do nothing but good” and in any case a “newsreel is bound to be more interesting than some of the other programmes if only because news cannot be so silly.”

And finally, Associated-Rediffusion is looking for a Television Programme Marketing Manager: 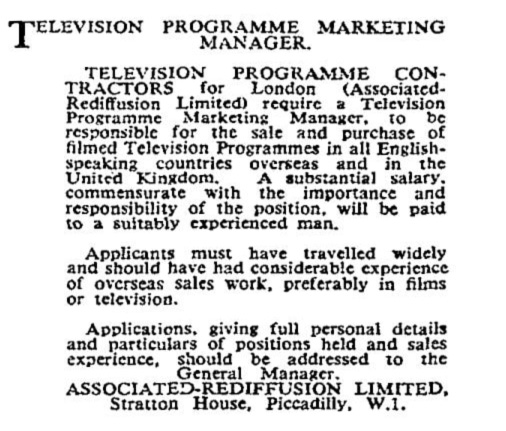